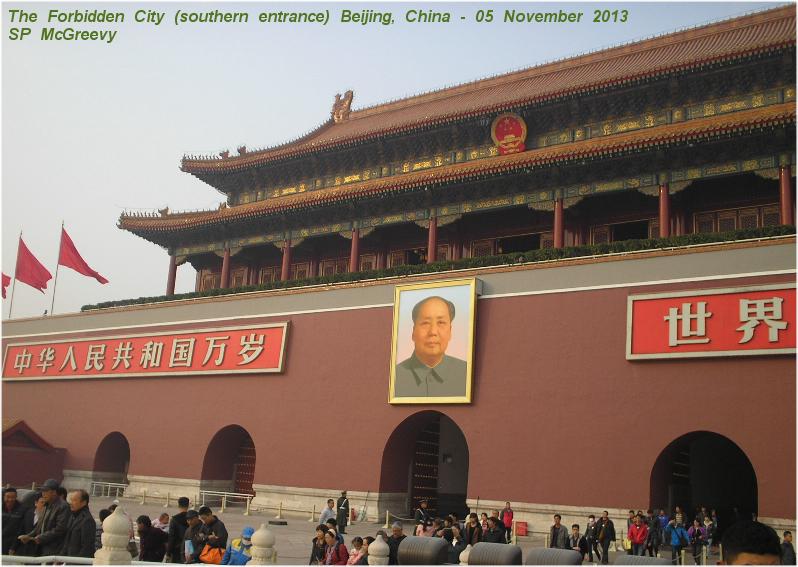 NEW Photos added 21June2019: I think of the 20 nations I have visited, China (PRC) and The Russian Fed. (St. Petersburg, Russia) were by far the coolest places I have visited on earth outside the USA/Canada big/long road trips!   The PEOPLE - like  you and I - are wonderful in both nations (I do not pay attention to national-gov't politics as a judge of nations - only through the *regular folks/cultures* I meet everywhere on our beautiful Planet Earth is I ascertain how lovely each nation I have visited is: tops all! But China was amazing - truly amazing... DX was amazing...)
-----gaia...
This is an audio-presentation of the sounds of longwave and mediumwave (AM) broadcast-band DXing in China - 03 to 20 November 2013.

During a 17-day tour of several Chinese cities and attractions, I brought with me my trusty Sony ICF-SW7600GR portable LW/MW/SW/FM receiver that is very sensitive. This was the best of two receivers I brought along with me on my tour of several Chinese cities and the surrounding countryside, plus four nights upon the Yangtze River (heading upstream) on the Century Legend ship.
{Please note that by Day-5 (in Shanghai) into this 17 day trip, I developed a bad head/chest cold and then by the 17th of November it flared-up into a full-blown FLU(!), hence my oft "nasally" sounding speaking - on a few days I had to remain on the Yangtze River ship to DX rather than enjoy the excursions that would have been so fascinating to see.}

Night-time reception of longwave and mediumwave was astounding in China even with just the barefoot loopstick antenna in my Sony-SW7600GR receiver - similar to MW DXing in the USA Mainland with a similar (or higher!) density of mediumwave stations on many 9 KHz-spaced Chinese channels. Particularly on the 42nd floor of my hotel in Shanghai, I enjoyed astounding longwave reception (broadcast and NDB receptions). By placing the receiver next to the window(s) in each hotel room (and then nulling any noise via the receiver's loopstick antenna positioning), sensitivity on MW and LW was quite extraordinary.

I made several recordings of 164 kHz Ulanbator, Mongolia (500 kW) during the trip particularly their sign-on at 0600 BJT/2200 UT recorded in Beijing, Xian, Shanghai, and most strongest on the top-deck of the ship whilst docked on the Yangtze River in Chongqing (Chongqing Province) on 16 November 2013.

The 27 MHz CB-skip recordings were made upon the Yangtze River aboard the Century Legend cruise ship, and several LW/MW DX recordings as well.

In most of these audio-files, I have tried to clearly narrate and describe the
receptions and frequencies I was tuned to, but sometimes I had to keep the digital-audio recorders somewhat removed from the receiver's loopstick antenna to reduce or eliminate RFI emanating from the recorders, so no audio-patchcord was used - simply speaker-to-mic. recording, which is plenty sufficient and clear for your enjoyment of the sounds of the longwave and mediumwave skip reception as heard in China.

All of these China-DX audio-files are in the public-domain for all to enjoy and distribute as desired - please enjoy the sounds of radio-DXing in China! Stephen P. McGreevy.